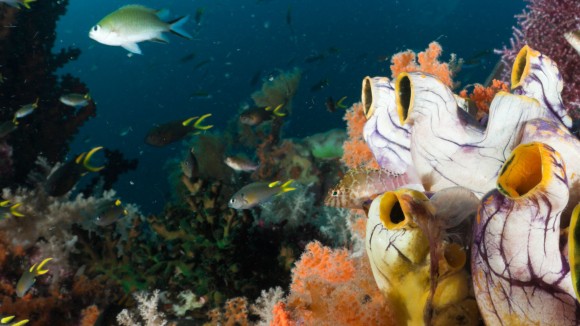 
Understanding how eddies affect the deep chlorophyll maximum and influence ocean productivity is currently not well understood because of difficulties sampling these mobile features. The ESP-LRAUV found the deep chlorophyll maximum at the centre of an eddy, and began sampling every three hours for three full days, all while maintaining position at metres depth, and within the eddy centre as the eddy slowly drifted west.

Samples collected every three hours were preserved and returned to the laboratory for processing once the vehicle was recovered. It was explicitly designed for ocean mapping of marine microbial communities and metabolic biomarkers Fig. Clio is a filtering and sampling machine the size of a large refrigerator.

When deployed from a vessel, Clio can dive independently to a maximum depth of 6, metres and return within hours, collecting and preserving samples along the way. Hundreds of litres of seawater are filtered for each sample, allowing a wide range of biochemical measurements to be made from the particulate samples collected, even from depths where particulate matter is scarce.

Clio significantly reduces the time required to collect these water column profiles, and the goal is that this increased sampling efficiency will facilitate a more thorough and rapid mapping of ocean biochemical processes. Clio also collects biomass samples suitable for omics investigations, allowing researchers to answer questions about the response of marine microbes to environmental stressors. Previous global studies have mapped ocean structure and the distribution of major marine nutrients.

However, a co-ordinated mapping of marine microbial community structure and markers of biochemical function has yet to be undertaken; though there is considerable potential and excitement about this possibility. A global dataset of marine microbial community composition and relevant biochemistry would be of tremendous value for improving and validating marine ecosystem and biogeochemical models.

Clio has been operational for a little over a year, and is being used in a study analysing the nutrient stress response in cyanobacteria communities in the Atlantic Ocean. As part of this study, it is being used for repeat profiles at the Bermuda Atlantic Time-series Study station until next summer when it will be used to create a sectional map of nutrient stress biomarkers from Bermuda to the North American continental shelf.

Environ Sci Technol , unpublished. Susan Evans is a microbial biogeochemist. John 'Chip' Breier is a marine geochemist and ocean engineer who studies the coupling between biotic and abiotic processes, from the seafloor to the surface ocean. Mak Saito is a Senior Scientist in the Marine Chemistry and Geochemistry Department at WHOI, who studies micronutrient use in marine microbes and their influence on biogeochemical cycles, using proteomics and metal analyses.

Julie Robidart is a molecular ecologist in Ocean Technology and Engineering, leading a biosensor programme focused on the development and application of novel technologies for analysing marine microbes. Her research involves analysis of environmental metagenomic and metatranscriptomic datasets to inform probe design and development and optimisation of molecular assays for autonomous instrumentation.

Susan: Microbes play a key role in maintaining life on Earth. Essential phytoplankton nutrients like nitrogen and phosphorous ocean fertilizers, if you will are far from abundant and evenly distributed in the ocean. Consequently, certain regions such as nutrient-rich coastal habitats may seem like terrestrial jungles where primary production is high and can be transferred rapidly to the top of the food chain.

Other regions such as the nutrient-poor open ocean may seem at first glance to be more like terrestrial deserts, at least to the naked eye. What happens to all the carbon fixed by phytoplankton and consumed by higher trophic levels? One possibility is that it simply sinks and sits on the seafloor in its various forms ranging from dead phytoplankton to blue whales. Because phytoplankton are not the only microorganisms in the ocean. There is a second microbial cornerstone of the ocean food web known as the heterotrophic bacteria and archaea, tiny and diverse cells often simply referred to as bacterioplankton.

If you have ever left a head of lettuce or a leg of chicken in your refrigerator while on summer holiday, only to return and find a pool of brown ooze and a rotten stench, then you are already familiar with the role bacterioplankton play in the marine food web. They are responsible for a processes known as remineralization, the breakdown of complex organic matter to carbon dioxide and essential inorganic nutrients.

Eventually that brown ooze in your fridge will be completely remineralized too, just give it some more time or maybe not. Well, in some places it does. At highly productive coastal locales where there are plenty of nutrients, the slow remineralization of macroscopic organisms produces those stinky byproducts of organic matter decay. But, in the massive clear surface waters of the open ocean, primary production is tightly coupled to remineralization; organic matter directly released from phytoplankton is rapidly consumed by bacterioplankton, complicating and limiting carbon and energy transfer up the food chain.

Hence the deep ocean is effectively a rich fertilizer that, when mixed back up into the sunlit surface waters, stimulates phytoplankton growth. Some carbon though is transformed into complex organic compounds that are not accessible to further degradation by bacteria or any living organisms. This recalcitrant organic matter drifting around in the deep ocean is the largest carbon reservoir on Earth. This biological pump, mediated my microorganisms, can be thought of as a massive carbon processing system that effectively scrubs carbon dioxide from the atmosphere.

Interestingly, under the right conditions some of the organic matter will reach the seafloor and become buried. Over millions of years it is transformed into oil, the carbon-rich liquid we use to fuel our automobiles and make our plastics. Hence, over geological time scales primary production at ocean surface has the additional effect of storing carbon deep in the Earth, only to be released en masse by humans later in time.

In this way, phytoplankton and bacterioplankton play a crucial role in the global carbon cycle, the circular path by which carbon flows from the atmosphere into the biosphere, land, ocean and back again. In fact, since the beginning of the 19th century, the ocean has devoured about half of the carbon dioxide emitted from burning of fossil fuels, offsetting accumulation of this green house gas in the atmosphere. Some oceanographers have even estimated that if the microbes in the upper ocean stopped pumping carbon down to the deep sea today, atmospheric carbon dioxide levels would eventually climb another fifty percent from their present state, accelerating global warming further.

One is then left to wonder: will the abundance, diversity and activity of these critical microbes be influenced by global warming? And if so, will adaptation of marine microbial communities to climate change accelerate or reduce the impact of global warming? These are difficult, yet pressing questions, in urgent need of answers. Among other ways, it does so by exchanging heat with the atmosphere, storing it and distributing it around the globe.

Consequently, as the atmosphere warms so does the ocean —the surface layer most rapidly. Although far from certain, several studies have predicted the consequences of global warming on marine microbial communities. One line of reasoning goes like this: As the ocean surface warms it becomes less dense and tends to float on top of the cold nutrient-rich deeper water.

Without replenishment of the nutrient fertilizer from below, phytoplankton in the warm top layer will starve, leading to reduced primary production and a corresponding decrease in carbon pumping to the deep sea. Is there evidence for this? The answer is yes and it comes from outer space. Scientists can use satellites to measure changes in phytoplankton productivity at a global scale. In doing so over several years, they have shown that sea surface warming in stratified regions of the ocean is accompanied by reductions in productivity.

Not good. However, the story is far from that simple. On a perhaps more positive note, primary production may in fact increase at high latitudes as chilly waters warm.

Size matters too. Research has shown a significant negative relationship between temperature and phytoplankton cell size.

In the Arctic, an ocean facing a particularly large and rapid period of change, the smallest species of phytoplankton are blooming while larger species are wilting away. This phenomenon may also be an adaptation to nutrient availability.